No Result
View All Result

No Result
View All Result


You look at Mark O’Meara’s track record at Pebble Beach and it’s no wonder he relishes every chance to return to the Monterey Peninsula’s iconic course.

As with most everyone else, it’s the beauty of the place that draws him back.

“Certainly whenever you come back to Monterey Peninsula, to me, it’s the prettiest place in the world,” O’Meara recently told Golfweek. “I was lucky, obviously, to have a lot of success there. But it’s still, to me, I’ve yet to find a prettier place.”

Is there ever a bad time to go to Pebble Beach? It ranks No. 1 on Golfweek’s Best Courses You Can Play list for public-access layouts in the United States, but sometimes the weather can be dicey on the coast, right?

“No, no,” he said. “I talk to people all the time, I say ‘Listen, yeah, you have those days, the Bluebird days with not much wind and just everything is alive.

“But I’ve also played it when it’s blowing 40 to 45, and it’s hailing sideways. And it’s still beautiful. But it’s got that mystique about it, you know.”

O’Meara will head to Pebble Beach the day after the U.S. Senior Open in July to participate in a clinic, part of the Mastercard Champion Series, where 100 percent of sales will support the mission of the Priceless Planet Coalition. Serving as a MasterCard golf ambassador, O’Meara hosts the clinic July 11-13. Two dozen players will stay at The Inn at Spanish Bay for a morning clinic with O’Meara, a round at Pebble Beach and a dinner with O’Meara. The price is $2,800.

O’Meara, who was inducted into the World Golf Hall of Fame in 2015, said when he meets up with other golfers at these clinics, he always looks forward to “at least give them some positive vibes when they go to the first tee.”

O’Meara’s dream year was 1998, when he won the Masters and British Open, but he had his first significant taste of competitive success when he won the 1979 California State Amateur at Pebble Beach.

“That had a big, big impact on what had transpired later on in my life,” he said. “You look at the names of the past winners of the California State amateur and it’s pretty impressive. Look, there’s the U.S. Amateur, there’s a lot of great tournaments in the amateur ranks, but you’d have to put the California State Amateur pretty high on that list, and easily within the top five or 10 best amateur tournaments you could play.”

His love of Pebble Beach continued to grow, and five of his total 16 PGA Tour victories came there.

“If you were gonna win anywhere on the PGA Tour, that’s not a bad place to win. If you can’t win, if you haven’t won a major, I mean, everybody would love to win at Pebble Beach.” 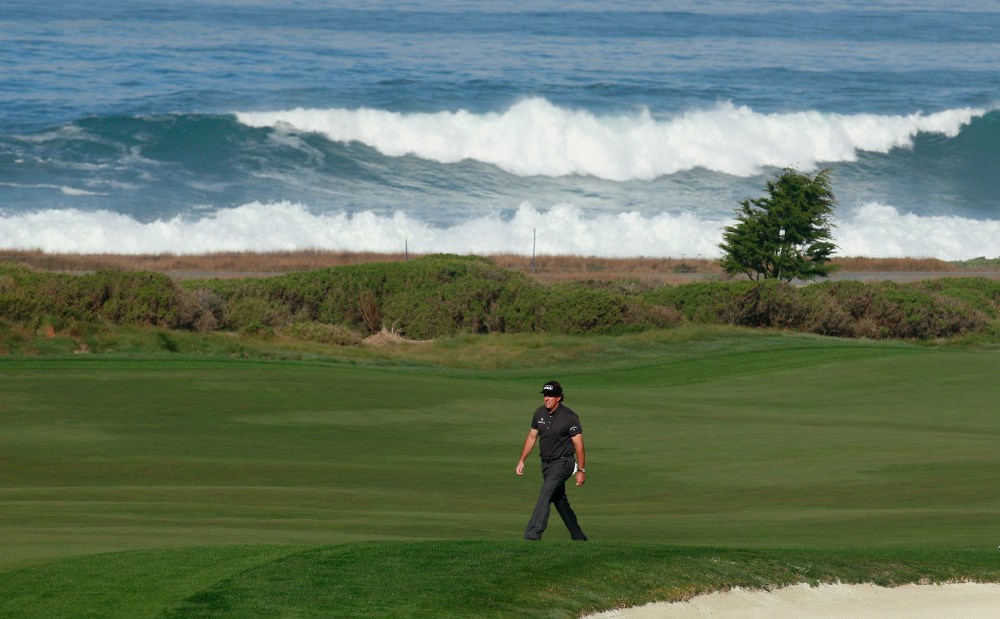 So what advice might he have for recreational golfers looking to tackle Pebble for the first time?

“The best thing you can do when you are playing Pebble Beach is just realize you’re in a very, very special place and just, you know, use that as the positive no matter what happens on the golf course.

“I think that to play well, and this works on any golf course but especially at Pebble, is trying to keep the ball below the hole with your approach shot into the greens. And they need to learn to rely a little bit more on their short game, you know, saving shots by getting the ball up and down. So chipping and putting is really important around Pebble Beach.”

One other piece of advice? Every once in a while just stop and soak it all in.

“Absolutely. You know, sometimes you get so involved in trying to shoot a score, hit a shot, and sometimes you just need to take a moment, like when you’re walking up that fourth fairway. Yeah, just take a moment to look back at the beauty that surrounds you there, the beach club and the peninsula there and the dramatic views that you have, I mean, it just doesn’t get any better. It’s one of the best prime pieces of real estate, and to have a golf course put there that has had so much history, whether it’s U.S. Opens or PGA Championships or the Crosby or the A&T now. There’s just been a lot of special moments that have happened on that golf course. A lot of history around there.”

“One of my favorite holes is the 18th hole. I think it’s just a classic, great par-5 finishing hole and lots of things can happen on the 18th hole. When you stand on that tee, obviously there’s a tremendous amount of pressure on your tee shot because the ocean’s right there on the left all the way up the left side. I just think that you need to stand up there and be committed and hit a good drive.

Footing The Tax Bill For The Government’s Fiscal Insanity

3 Ways To Validate And Love Yourself

What Foods Hold Special Appeal Because of Their Texture? Lucky Charms Cereal, Croissant, Popcorn–What Else?

How To Stop the Negative Thoughts From Spiraling In Your Mind

Annabelle Gurwitch: “One of the Best Life Hacks for Happiness I Know…I Ask Myself: ‘How Important Is It?’”

Emotional Intelligence to cope with the changing times

One can have no smaller or greater mastery than mastery of oneself.

“Irrespective of what religious or intellectual philosophy guides an enlightened person’s life plan, self-mastery plays an important, if not quintessential role, Do not MISS out on our Latest News Letter.”